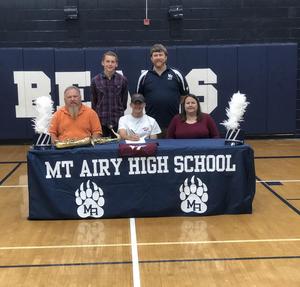 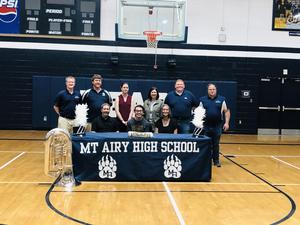 On Friday, May 2, two Mount Airy High School senior band members signed to continue their musical careers at the collegiate level. Philip Daniels will be continuing his career at the Hayes School of Music at Appalachian State University while Hunter Eaton will be performing with the Virginia Tech Marching Virginians.

On Friday, May 2, two Mount Airy High School (MAHS) senior band members signed to continue their musical careers at the collegiate level.  Philip Daniels will be continuing his career at the Hayes School of Music at Appalachian State University (ASU) while Hunter Eaton will be performing with the Virginia Tech (VT) Marching Virginians.

In recent history, these students are the first to be recruited to go on to perform musically at the collegiate level. MAHS Band Director Mr. Jonathan Jones is very excited about the students’ future stating, “These two young men have been a great part of building the band back at Mount Airy.  ASU and VT are getting high-quality musicians, but even greater individuals.”

Daniels will be majoring in Music Industry with a focus on Marketing/Promotion, as well as earning his performance certificate. Following his time at ASU, he plans to attend graduate school for performance. Daniels chose ASU, over two additional colleges where he auditioned and was accepted, because of his positive experiences. “I thoroughly enjoyed each lesson I had with tuba professor, Dr. Bethany Wiese, and know I will enjoy learning from her for the next four years.” Dr. Wiese brings a vast array of experience with her to the program at ASU as she has earned degrees from Northwestern University, Yale University, and Lawrence University.

Daniels began playing tuba his 8th grade year. He notes, “I was always shy, but tuba gave me a voice I wasn’t ashamed to use.” During his time in high school band, he earned many accolades. He made All District Honor Band (two years), was Principle Tuba (1st Chair) at Virginia Tech University Honor Band, and was Principle Tuba in the Surry County Honor Band (four years).  He also served as the Principle Eb Tuba player in the North Carolina Youth Brass Band (two years), was Band Student President, low brass Section leader, President, and Vice President of the Mount Airy chapter of Tri-M.

Daniels parents, Dr. Mae Daniels and Lee Daniels, are excited about the future, “Philip will be in a place that is perfect for him and he will be doing what he loves to do which is playing his tuba, studying music theory, and exploring the possibilities. Mae and I could not be prouder of our son!” states Mr. Daniels.

Eaton will be attending VT where he will he joining Polly Middleton, Director of Marching Bands, and The Marching Virginians. There he will also be doing performance ensemble. Middleton offered Eaton a position that would allow him to receive his degree and continue his musical career at a high level. When it came to deciding where he would go after high school, a positive experience made the choice easy. “I chose VT because I went up for a visit to watch the band practice and their band director personally talked to me and let me go up in the director’s tower to watch. That really meant a lot, and she made it feel like home from the very first minute.”

Eaton is grateful for this continuation of his musical career and stated, “I’m very excited for the opportunity because it truly is a once in a lifetime experience to be able to participate in a collegiate marching band, where I will get to go to football games, parades, and more. It really is high school marching band supersized, which is what makes me very excited!”

Eaton’s hard work has allowed him to be part of the Surry County Honor Band and take a leadership role with the MAHS band. Along with playing saxophone, he has served as the drum major for the Marching Granite Bears. Eaton’s leadership has shown in the success of the program as he has received multiple awards as a drum major and the band has regularly earned superior and excellent ratings at competitions.  Eaton is also a tennis player at Mount Airy, recently winning conference and regional championships in doubles. Eaton’s parents, Dole and Laura, note, “We are excited to see Hunter’s hard work produce such opportunities for him.”