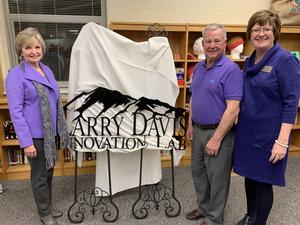 While Davis is working the final week of his educational career with Mount Airy City Schools, he is finishing on a high note. The famously known “Red Green Report,” also known as the Technical Skill Attainment Performance Report, has just been released ranking Mount Airy first in the region and eighth in the state.

In the late summer of 1977, Mr. Larry Davis walked through the doors of Mount Airy High School (MAHS) as a typing teacher.  Since then, he has dedicated nearly 43 years to the students and community of Mount Airy. He has been a trailblazer, achiever, and champion for not only the possibilities he saw in his classroom and school but those he recognized across the district and state. While Davis is working the final week of his educational career with Mount Airy City Schools, he is finishing on a high note. The famously known “Red Green Report,” also known as the Technical Skill Attainment Performance Report, has just been released ranking Mount Airy first in the region and eighth in the state. It was only suitable that his career and legacy be celebrated with several of his former and current leaders, colleagues, and students. The celebration to honor him was held on Monday, February 24, 2020, with over 125 of these individuals gathered in the newly renovated media center at MAHS. After greeting old friends, Davis was asked to sit while being presented honor after honor.

Former Mount Airy City Schools (MACS) Board of Education (BOE) member and current Mayor, David Rowe, announced the first honor by proclaiming February 24, 2020, as Larry Davis Career and Technical Education Day in City of Mount Airy. Superintendent Dr. Kim Morrison followed by recognizing Davis as being the first recipient of the North Carolina Association of School Administrators 2020 Trailblazer Award. Explaining this new award, Dr. Morrison exclaimed, “I nominated you for a leadership award, and the committee felt so strongly about the work you have accomplished in your career, that they created an award in which you are the first recipient! The Trailblazer Award will be given in the future to educators like you, transformational leaders who have inspired their peers and their students with innovation and excellence.”

Early in his career, Davis worked closely with Dr. June Atkinson, regional director for vocational education at the time, to implement a model classroom at Mount Airy Senior High (MASH). This exemplary lab allowed other educators around the state to visit and see first-hand the possibilities of technology in education. He didn’t advocate for technology for the sake of something new and shiny, but for the workforce development that he realized as a growth opportunity in North Carolina.

His efforts, knowledge, and willingness to collaborate allowed the entire state of North Carolina to be impacted as he led the shift from typewriters to computers. Looking back, one might think “that was easy,” but it was no small task to convince an entire state to move forward as the technology changed at a rapid pace. When asked about the career of Davis, Dr. Atkinson noted, “If we think about what an impact that conversion had, we would understand the leadership, risk, and advocacy that Mr. Davis led during a time when computers were a hard sell to teachers. He has been an advocate for education over the years and worked tirelessly to push the cause of workforce development.”

Dr. Atkinson, who would later serve as State Superintendent, shared the specific steps Davis took in helping the state make this technological transition. “In the early 1980s, teachers did not want to transition to word processors or computers.  Mr. Davis met with Tandy representatives to bring the first working computer lab to a school. The first school lab in North Carolina was in Mount Airy with Radio Shack Tandy computers. I wanted to use it as a model for other districts.  My team and I asked Mr. Davis to hold statewide training sessions for multiple summers to help reluctant teachers transition and begin to use the new computers instead of typewriters.  Mr. Davis would take all of his computer students (almost all males) to the local factory, Spencers, and during employees’ lunch break, the factory owner allowed Mr. Davis’ students to practice on the computers at the factory.  This was one of the first examples of a school-to-work partnership and application of computer training, which we know is essential for student learning.”

It was through his success as a pioneer and his enthusiasm for the work that propelled him to the role of Career and Technical Education (CTE) Director for MACS. After spending over 25 years in this role, it is evident that Davis has set the example of the lifelong learner and educator committed to the success of public education. He has a passion for the continued growth and change of CTE programs that prepare students through skill-based and work-based learning experiences. Throughout his career of leadership, he built numerous strong and collaborative relationships that have contributed to the great success of the MACS CTE, at both the middle and school level. He is well versed in how to listen to the needs of the current workplace through his business partnerships. He has also been eager to develop new ones based on new industries, small businesses, and the local economy.

When asked about Davis’ contributions to CTE, longtime Regional CTE Coordinator Marty Tobey shared, “Larry frequently shares CTE best practices during regional meetings. He is very proud of Mount Airy City Schools and the CTE program.  Most recently, he has shared information about Mount Airy Middle School’s Career Café, the CTE showcase featured during the 5th-grade tour, the state-of-the-art middle school Health Sciences program including a HOSA chapter which very few middle schools have, the Richard Childress Racing Driven to Lead Program, the Drone program, one of the first in the state, at Mount Airy High School, and the achievement of receiving one of the first CTE Middle Grades Expansion Grant to hire a middle school Career Development Coordinator.  Larry does not claim these initiatives as his own but as a concerted effort among the district staff.”

The honors weren’t over as Chief Officer Dr. Phillip Brown stepped to the podium to tell a few stories from his time with Davis. Following laughs, Brown requested that Davis, his wife, and Dr. Atkinson join him. It was during this time that Davis was presented with his third honor of the evening. Brown stated, “It’s the honor of my career to be able to pay forward a small token of the appreciation that we as Mount Airy citizens have for this legend.” He then presented Davis with The Order of the Long Leaf Pine, which is the highest honor given by the North Carolina governors to those who have made significant contributions to the state and their communities through their exemplary service and exceptional accomplishments.

Dr. Eric Warren, MASH graduate and Chief Technology Officer for Richard Childress Racing, followed with the stories of how Davis impacted him as a young high school student. “Mr. Davis let me run. He allowed my interest in computers to play out through hands-on activities. That opportunity built confidence in me and for that I am grateful. My recommendation to other educators is to #belikeLarry.”

The grand finale of the event occurred when Dr. Morrison requested that all former and current students, CTE teachers, and the Board of Education members stand with Davis. It was then that she revealed that MACS BOE would be naming the workspace at MAHS, the Larry Davis Innovation Lab.

When asked about the closing of his career, Davis stated, “It’s been a good ride from beginning to end. I have worked for great superintendents and Boards of Education, along with dedicated teachers and central office staffs. If I could do it all over again, I’d start tomorrow. Mount Airy has been good to me and the Lord has blessed me with a wonderful place of employment in this district.”

While Davis’ career may be coming to a formal end, his impact lives on. Previous students who have been impacted have chosen to give back and generously so to the programming in MACS. These former students have become leaders in their fields, thanks to discovering their passions throughout the variety of CTE offerings found in the small district. Based on their enthusiasm and drive, Davis’ legacy will continue on for years to come through the lives of others.

Watch the recording of the event here.