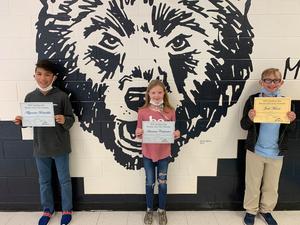 Mount Airy City Schools students have been able to compete academically and athletically during the pandemic. Most recently, students participated in their classroom spelling bees, school spelling bees, and district-wide spelling bee.

Mount Airy Middle School had six students finish in the top two of their grade level bees to move on to the district-wide bee. Sixth graders Alejandro Bobadilla and Sabrina Brown, seventh-graders Luca Livengood and Tommy Simmons with eighth-graders Guadalupe Rubio and Isabella Willard earning their way to the next level.

While school and district bees are normally held in front of a packed audience, COVID-19 provided guidelines that limited the number of people who could watch in person. Students and parents were able to enjoy the competitions via an online platform. The lack of audience members was surely a relief to students as spelling in front of parents and peers can be a stressful event. Students did a great job managing social distancing and mask usage during the bee. For judges to do their job well, they needed to be able to see the mouths of the spellers. Thanks to special microphones that picked up audio from a good distance, students were able to remain safe and pull their masks down for judges to see and hear them spell.

The district bee was a sight to see as fourth-graders and a sixth grade took the titles. Fourth-grader Jack Moore won the bee with fourth-grader Summer Carpenter and sixth-grader Alejandro Bobadilla ending as runners-up.