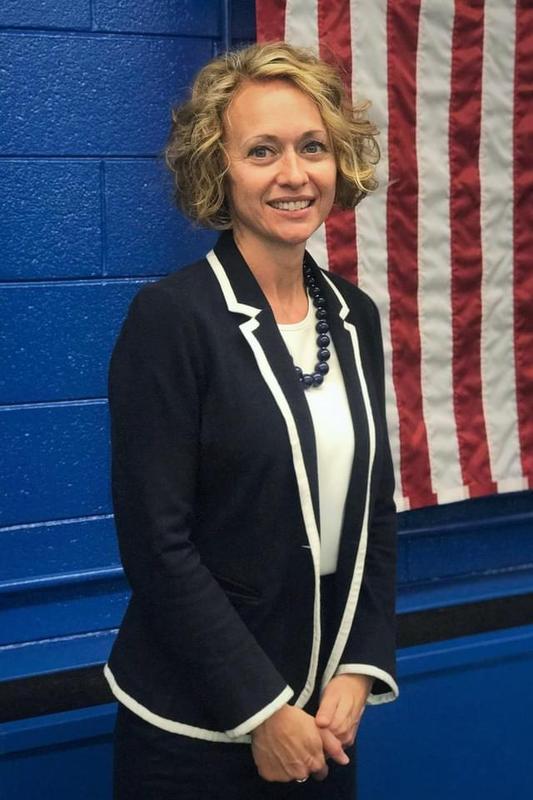 At the end of the hardest year in their collective years in education, staff members gathered in the Wallace Shelton Stadium at Mount Airy High School. The group welcomed back their traditional end-of-the-year picnic where they were served by board members and central office staff. Instead of meeting inside the Commons Area, the group spread out along the football field catching up with friends from across the system. A video was played on the scoreboard recapping the work that was accomplished from August to May throughout the district. The video included brief clips from many of the district’s supporters thanking staff members for the amazing work they did throughout the school year.

Dr. Kim Morrison, Superintendent, welcomed the crowd and applauded them for a fantastic school year. She noted, “Many people didn’t think we would make it through this school year, but WE DID IT!” She then called out each school to celebrate this victory by cheering. Morrison expressed gratitude for all 271 employees and spoke to how her habit of journaling gratitude impacted her life. She pointed out that while this year had been difficult and trying, there were 1,000 blessings in each day. She encouraged staff to practice gratitude over the summer and presented each employee with a gratitude journal.

Dr. Phillip Brown then introduced the “of the year” video that showcased the numerous staff members who were selected by their peers to represent their region, school, or department. Following the short video, Brown described the honor of being selected by one's peers as one great expression of appreciation. He noted, “... the most nominated person in the district for the of-the-year awards was ‘everyone’. Many and I mean many people nominated ‘everyone’ on staff for a job well done. Your hard work has not gone unnoticed.” After asking all teachers of the year to stand and be appreciated, he called for an envelope to reveal the District Teacher of the Year. After great applause, Ms. Marie Hauser walked to the front of the crowd to receive recognition, flowers, and an engraved granite nameplate.

Brown stated, “In a year when every teacher has given it their all, Marie has been selected to represent the hard work of so many. She embodies our motto of Lead, Innovate, and Serve and will carry the torch as our district’s teacher of the year out of this pandemic and into a more normal school year. We are grateful to all of our staff for a job well done and congratulate all of the of-the-year award recipients.”

Hauser’s favorite quote is from Vince Lombardi, “Winners NEVER quit, and quitters never win.” This can be found hanging in her classroom where she models perseverance and encourages her students to continue to learn and grow, even during difficult times. She is a 1997 graduate of Appalachian State University where she was a Teaching Fellow and is completing her 22nd year of teaching. She has taught in three different schools across three different districts where she has been recognized as Teacher of the Year four times. Part of her career includes teaching at MAMS when it first opened for several years. She returned to MAMS in 2016, but it wasn’t until the 2018-2019 school year that she returned to her favorite grade level, seventh grade. That happened to be the same year that she, her co-teacher Dalton Tedder, and seventh-grade students achieved the recognition of highest proficiency in the state.

When asked about the honor of being named District Teacher of the Year, Hauser noted, “This is a true honor, especially this year. The effort put forth by our district and Mount Airy Middle School to keep students engaged throughout this school year was outstanding. I am grateful to have been part of this enormous endeavor. I love seventh graders and teaching the seventh-grade math curriculum. I feel like I am in a position where I can influence students to enjoy math and begin a love of algebra. God made me to be a cheerleader for young math students. I continue to try to make my class be a safe haven for students to grow in their confidence, problem-solving skills, and improve their overall mindset regarding math. There is always something to work on! This year was a challenge, but WE NEVER QUIT!”