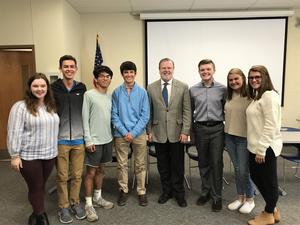 His visit started in the media center where a student panel was ready to ask and answer questions. Superintendent Dr. Kim Morrison began the session by sharing that Mount Airy High School is one of the top high schools in the state and is able to provide innovations thanks to the district’s partnerships. She shared the school system’s accomplishments as well as how the work of district positively impacts students, their future paths, the community, and local businesses.

Chief Academic Officer, Dr. Phillip Brown led the discussion and started with, “Why did you choose Mount Airy City Schools?” Many students noted that they transferred to the district seeking opportunities such as learning Mandarin Chinese, traveling to China, internships, or partnering with Richard Childress Racing. These partnerships came directly from industries such as Renfro, Andrew Pearson Glass, and NASCAR asking to partner with us for workforce development. Some students noted that they had been in the system since kindergarten and the choice was one their parents had made for them. Owen Perkins noted that his father, who is a local business owner, graduated from Mount Airy High School and his parents believe his success is due to the foundation provided by the system.

When asked, “What is one thing in your educational experiences here that stands out to you?” Junior Meredith Marion noted that while the district boasts many innovative programs to choose from, the athletics have also allowed students success on a large level. The bonds created through teams, the experiences of competing, and traveling have provided her and others with opportunities that are not found everywhere. Others mentioned that being part of HOSA, Future Health Professionals formerly known as Health Occupations Students of America, allows students to dive into the medical field early, compete at a national level, and graduate high school with one or more medical certifications.

Senator Berger asked the students what questions they had for him and Senior Brooksie Lawson asked if he had been to other districts like Mount Airy City Schools. Senator Berger noted that all systems are different yet share similarities. He noted that he was walking away from Mount Airy City Schools realizing the breadth of opportunities available in such a small district.

Dr. Kim Morrison, Superintendent, noted, “We are grateful that Senator Berger visited us today to interact with our staff and students. We believe partnering with the state legislature is important if we want to continue to innovate to create a robust workforce for Mount Airy’s future.”

Following the panel, Senator Berger took a brief tour of the school where he saw the innovative transformations that had taken place over the past year at Mount Airy High School. He spent time in the new health science lab where he spoke with students and Health Science teacher Lynn Snow. Students shared their work toward certification and plans to enter the medical field after high school. He also visited the Career and Technical Education building where he met STEAM Lead Teacher Garrett Howlett who showed him the school’s race car simulator, 3D printer, and drone materials for the upcoming class. The tour ended in one of the school’s three Innovative Classrooms where Dr. Morrison shared the district’s work of changing student learning environments and the district’s ability to implement innovations quickly due to the size and culture.