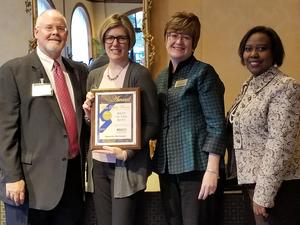 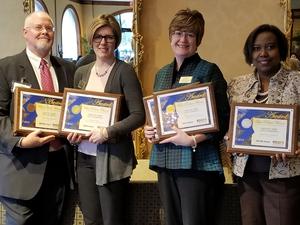 Mount Airy City Schools has been recognized for excellent work in public relations and communications by NCSPRA.

On Friday, February 1, 2019, the North Carolina School Public Relations Associations (NCSPRA) held their Blue Ribbon Awards for Effective Communications Ceremony at the O’Henry Hotel in Greensboro, North Carolina. This annual recognition celebrates the excellent work of public relations and communications from districts across the state.

A Mount Airy City Schools officer was among public relations professionals honored. Public Information Officer Carrie Venable was present to be recognized for her work.  The Mount Airy City Schools district won nine awards; four gold awards - one in electronic media, one in Image/Graphic Design, and two in Publications; one silver - in Digital Media Engagement; and four bronze - two in Digital Media Engagement and two in Special Events/Programs.

For the fourth year in a row, Venable was recognized for her accomplishments by the organization. This year the group received 322 submissions.

The program concluded with the Best of the Best awards. This coveted award is earned by the submission with the highest score in each category, leaving eight additional awards to be named. Venable was shocked when Mount Airy City Schools was revealed as the Best of the Best in the Image/Graphic Design category. Superintendent Dr. Kim Morrison was present to receive the award with Venable.

Venable noted, “This award for our STARS (Successful, Thoughtful, Academically  Resourceful Students) celebrates the diverse population we proudly educate each day. Being able to showcase students across the district and their hard work in and out of school allows these students to be recognized and celebrated. This provides examples to all students that success doesn’t follow one path or look the same for everyone.”

Superintendent Dr. Kim Morrison stated, “We are so excited that the state has recognized what a great job our team here in MACS does telling our story.  Carrie Venable, Public Information Officer, has done a wonderful job making sure our community knows about our fabulous students and staff.  One of the top awards in the state, “Best of the Best” was given for our Star Students Campaign and highlights what is right about MACS.”